Snooker for Beginners: An Easy Guide to Help You Start Playing Snooker Right Away

Stylish suits, smokey rooms, and a whiskey bottle next to the table; there was a time when we considered snooker as the game of class that only a few men could play.

These men inspired many and showed how elegant the game is and how mesmerizing the shots can be!

We wanted to learn the game, to make those cool shots, and to show off our skills.

However, not everyone is aware of how much dedication and patience this game requires, and how hard the rules and terms of this sport can be.

As a result, when a beginner starts to play snooker, it doesn’t take much time before he quits.

To solve this problem, in this post, we’ll cover everything a beginner needs to learn about snooker.

So, without any further delay, let’s dive right into our topic.

The Basics of the Snooker

Bolt: the bottom half of the table

Balk: the top half of the table

Balkline: Line separating the balk and bolt of the table

The D: the D shape on the top of the table

Pack: the triangle of red balls

Frame: each round of snooker game

Free ball: you can hit any ball after your opponent makes a foul and leaves you unable to hit the ball you needed to.

Potting: putting the balls in snooker pockets (side holes)

Like every individual sport, snooker requires a unique set of tools.

Typically, a snooker game consists of 22 balls on the table (1 cue ball and 21 object balls).

The white ball or the cue ball helps in potting the other balls.

The fifteen red balls are each worth 1 point when potted.

The other six balls include the yellow ball worth 2 points, green 3, brown 4, blue 5, pink 6, and black worth 7 points.

The game begins with a typical setup of the balls in their proper positions.

As the name implies, we have to break off the position of the balls, specifically the red balls.

However, we have to release the least amount of balls so that our opponent does not have a clear shot on any ball.

After the break-off, your opponent takes the turn and tries to pot in a red ball.

A player continues his turn until he fails to pot a ball or commits a foul.

Some things to keep in mind during the middle game are:

After putting all the red balls into the pockets, you have to pot the colored balls.

However, this time we will not take the colored balls out of their pockets.

The ball with the least value is potted first, then the second least, and this sequence continues till the black ball is potted.

In the end, we sum up the values of the balls potted by each player, and the person with the higher score wins.

Fouls of the Snooker

The most common fouls that occur during the game are the following:

For example, if you pot the pink ball instead of brown, 6 points will be awarded to the opponent.

Tips to Improve Snooker as a Beginner

Snooker is a sport of pure skill.

As a beginner, your priority should not be to pocket as many balls as possible, but to learn the proper technique behind each skill.

The better way to learn any technique is to break it down into smaller steps and then master each step one by one.

Ever wondered what helped Joe Davis to become the undisputed king of the World Snooker Championships? Or What made Ronnie “the rocket” champion of snooker?

Have a Snooker Table in Your Home

Having a snooker table available all the time ensures daily practice and consistency.

Consequently, this is one of the most vital components that can change your game from an unskilled beginner to a snooker master in the shortest amount of time!

If you want to play with your full potential, your snooker cue should be in sync with your playing style.

The snooker cues come in a different size, weight, and material.

Some people prefer a lighter cue, while some owe their games to the heavier ones. Ultimately, it comes down to your natural preference.

So, choose your partner with care, and it will help you get more points in every single game.

If you want to know more about the snooker cues, then head over to the top snooker cues of 2020. 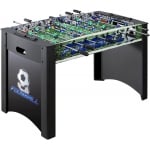